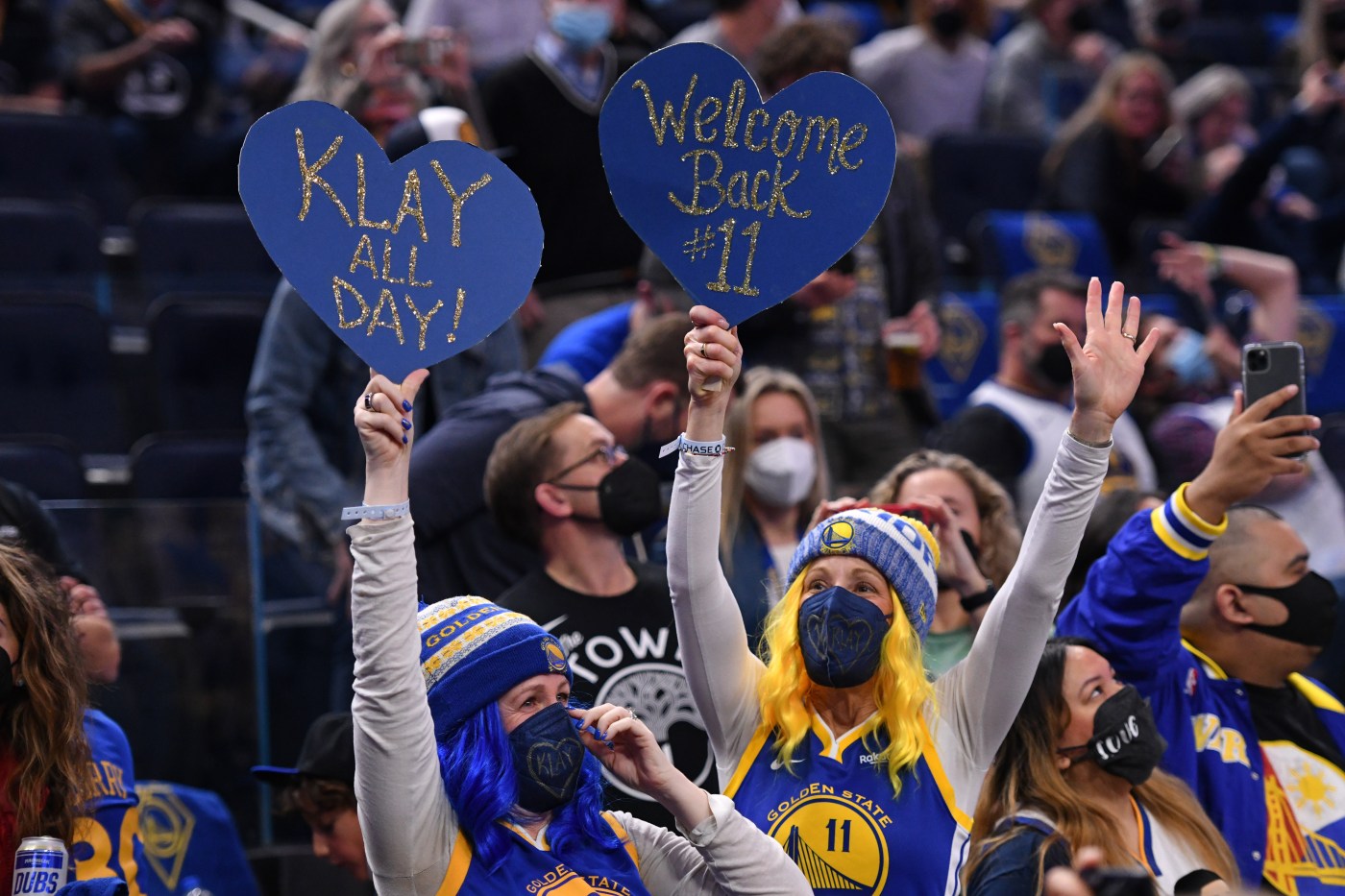 Thompson had returned to the hardwood after an arduous rehab through two major injuries. Fans rode the highs and lows right with him, culminating in a celebration of his first game back against the Cleveland Cavaliers on Monday Night.

“I got emotional,” said Ashley Seaman. “I was getting chills when I saw all the videos. Watching him is exciting. It just feels like they’re complete again with Steph Curry and the rest of the guys.”

Seaman, a self-proclaimed Klay Thompson super fan from Mountain View, wore a Washington State University Thompson jersey gifted to her by her husband. Her family and friends know she’s “obsessed” with Thompson. When she saw the 31-year-old make his first bucket on his first shot attempt, she teared up a bit.

“Out of all the players, Klay is my favorite, he’s my MVP,” she said. ‘He brings so much pureness and heart. That’s what makes him exciting to watch play.”

Seaman was one of a sea of Warriors fans filling Chase Center with a deafening roar that rang out with every Thompson three-point attempt, drive, sub-out and sub-in. Plenty of fans monitored the news cycle looking for Thompson’s return date to ensure they could get tickets.

James Quiroz, Carlo Villanueva, Byron Encina and Phillip Quiroz, friends from around San Francisco, Daly City, Hayward and San Jose did the math and bought tickets when they saw Thompson throw up six fingers — representing the six days until his return — last Monday.

“We had a group chat waiting for this day since the beginning of the season,” said Phillip Quiroz. “We were anticipating what day he would come back and do it for sure.”

The friends attended Monday’s game decked out in Thompson gear from headbands to No. 11 jerseys to a captain’s hat — a tribute to Thompson’s Instagram live sessions broadcast from his boat on the San Francisco Bay.

“We feel for the guy he’s been out two and a half years,” said Quiroz. “We’re right here with him the whole rehab process.”

Greg Greenwood, a season ticket holder for 23 years, and his son Julian Greenwood attend games every week or so. The pair wore No. 11 jerseys special for Monday’s game and reflected on Thompson’s legacy.

“For me Klay was one of the most bullet proof guys,” Greg Greenwood said. “He never missed games. To have an ACL, a terrible injury, and then the achilles on top of that. There was some thought in my mind it could be career ending. For him to come back is incredible.”

Julian Greenwood was already excited about how Thompson will better a Warriors team that entered Monday’s game with a 29-9 record.

“Klay spaces the floor so it’s going to allow Steph to get more open looks,” he said.

Excited to see what the season had in store with Thompson’s return, the father and son also looked back at what Thompson overcame.