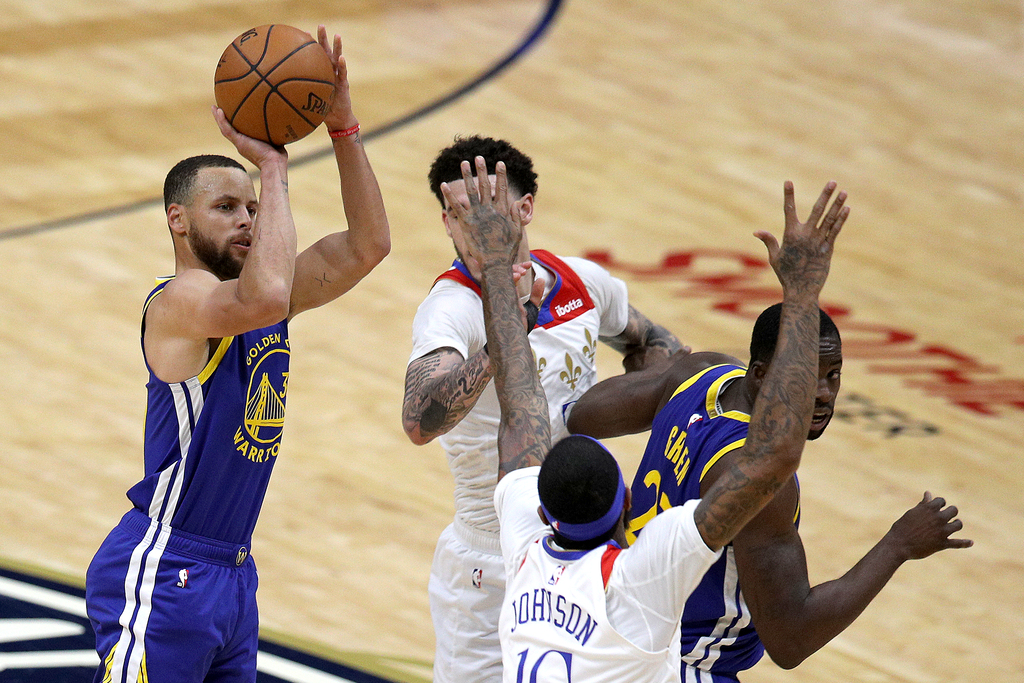 With 21 seconds to go, Stephen Curry’s potential go-ahead 3-pointer clanked off the front of the rim and the Warriors fell to the New Orleans Pelicans 108-103 Tuesday night at Smoothie King Center.

In a back-and-forth game with 13 lead changes, Golden State (33-33) had a chance to steal a win in New Orleans but were ultimately bested by tired legs and a Pelicans team desperate to make the playoffs.

“I thought we were tired,” head coach Steve Kerr said. I’m really proud of the guys, they battled the entire way, and clearly we were tired in the fourth.”

With the score tied at 92 early in the fourth quarter, Draymond Green blocked Zion Williamson’s layup, made a 3-pointer and found Kent Bazemore in the corner to give Golden State a three-point lead with 2:30 remaining on the second night of a back-to-back set in the Warriors’ final road game of the season.

But New Orleans responded as Lonzo Ball (33 points on 11 for 23 shooting) made his seventh 3-pointer of the game and a stepback jumper to give the Pelicans a 102-100 lead with 25.3 seconds left.

After Kerr’s timeout, Curry got the ball off Green’s handoff and launched a 3-pointer that hit the front of the rim and backup guard Mychal Mulder failed to secure the offensive rebound. In all, the Warriors ran out of gas and the Pelicans closed the game on a 27-10 run.

For the Pelicans, Williamson finished with 23 points, 12 rebounds and seven assists. The Warriors had the same game plan they used in Monday night’s blowout win, opting to guard Williamson with one defender and force New Orleans’ shooters to win the game. On Tuesday, they did, going 12 for 30 (40%) from 3-point range.

The loss drops the Warriors back to .500 but are still in possession of the No. 8 seed in the play-in tournament before heading into the season-ending six-game homestand that begins Thursday against the Oklahoma City Thunder at Chase Center.

The hardest thing about traveling during the NBA’s pandemic season? Not going out to dinner, Steve Kerr says.