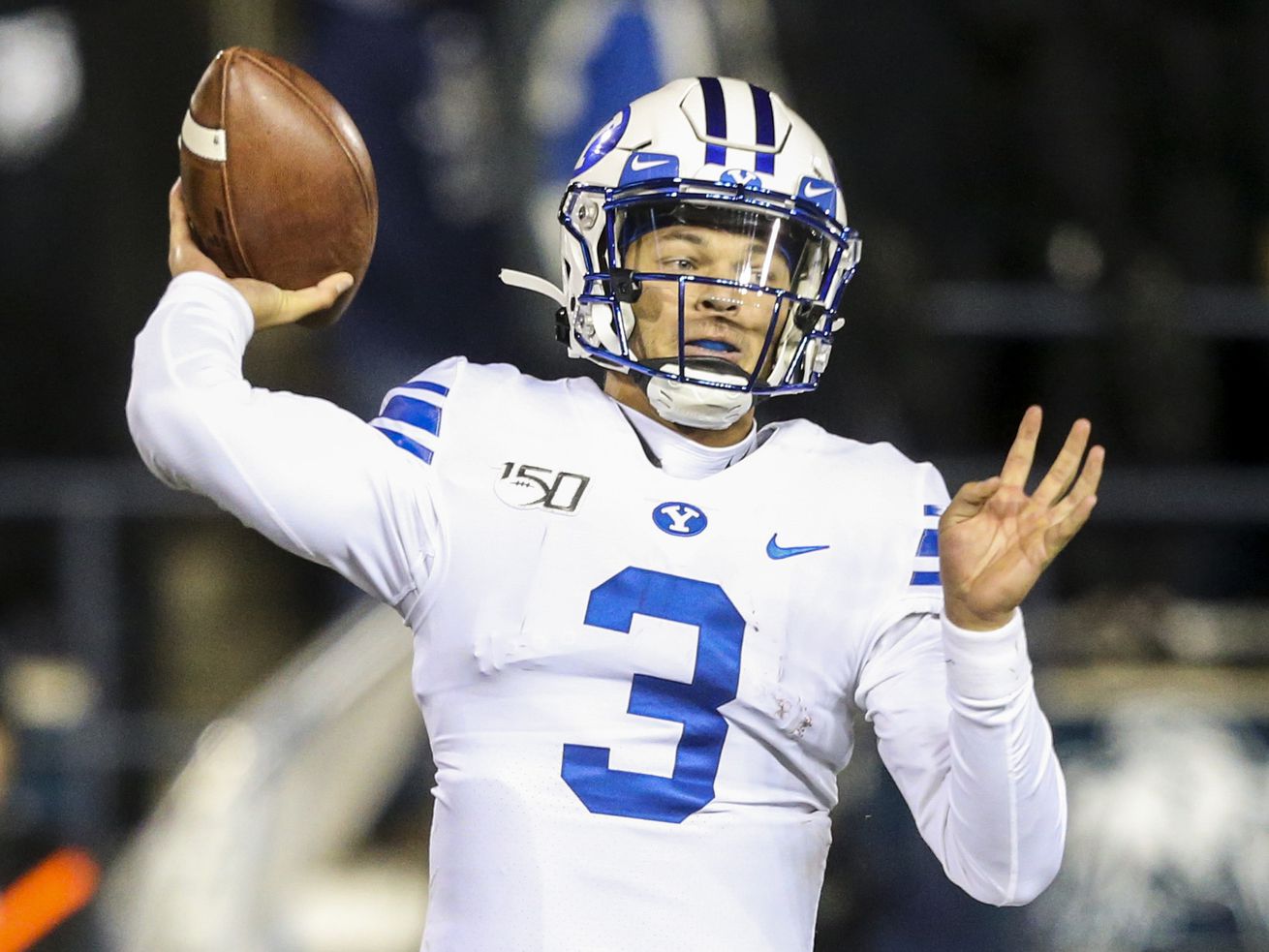 BYU Cougars quarterback Jaren Hall (3) makes a throw during an NCAA football game at Maverik Stadium in Logan on Saturday, Nov. 2, 2019. Hall and Baylor Romney have emerged as the frontrunners in the race to replace Zach Wilson as BYU’s starting quarterback in 2021. | Colter Peterson, Deseret News

Who are the starters in 2021? Here is the Deseret News’ annual post-spring stab at a depth chart for the Cougars, who have a lot of shoes to fill in a lot of positions

As the BYU football team concluded spring camp at the end of March and started looking ahead to the 2021 season, head coach Kalani Sitake and his staff’s message for the Cougars moving forward became readily apparent.

“Depth is always a concern, but I think the bigger thing is the need for our players to keep the competitive edge that we have had,” new offensive coordinator Aaron Roderick said.

That wasn’t a concern a year ago at this time, after the Cougars in 2019 went 7-6 and finished the season with back-to-back losses to San Diego State and Hawaii.

“Guys were determined to not let that happen again,” quarterback Zach Wilson said at the time. “We knew we were better than that.”

“We gotta still keep that chip-on-our-shoulder attitude, with something to prove. We had a really good year. Don’t get me wrong. But there are a lot of people that still doubt us. There are a lot of people that don’t believe that we have good enough talent here even with the guys that we saw perform (at pro day).” — BYU football coach Kalani Sitake

The Cougars got better in a big way, despite having their schedule wrecked by COVID-19, and put together one of the best seasons in program history, going 11-1 and finishing No. 11 in the final Associated Press Top 25 poll.

The worry now for coaches and players not moving on to the NFL or other pursuits is complacency.

Quarterback Baylor Romney, one of four QBs vying to replace Wilson and be the starter when the Cougars open the season Sept. 4 against Arizona in Las Vegas, said there are enough remaining players who remember 2019 that maintaining that “chip on our shoulder” shouldn’t be a problem.

It appears to be a rebuilding year for Sitake and company, but don’t tell them that. Gone are some of the better players in the coach’s first five years at the helm: Wilson, offensive linemen Tristen Hoge, Chandon Herring …read more