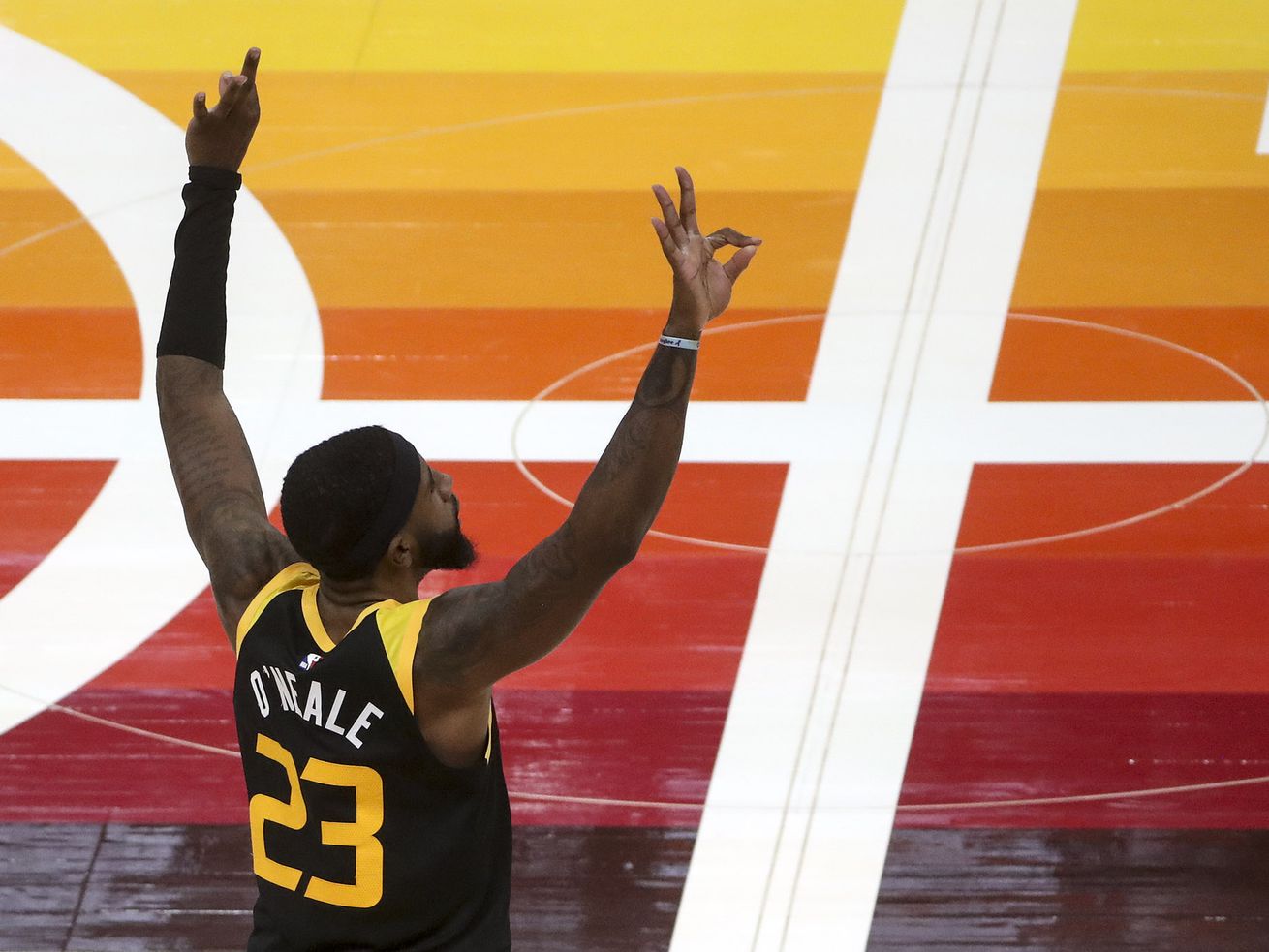 Utah Jazz forward Royce O’Neale signals his 3-pointer late in the fourth quarter against Philadelphia at Vivint Arena in Salt Lake City on Monday, Feb. 15, 2021. The Jazz’s proficiency from distance is what makes them such a successful and dangerous team. | Steve Griffin, Deseret News

Yes, the Jazz are dealing with injuries and a mild slump, and could even face the Lakers in the first round of the playoffs. But if they do, LeBron James will learn why this year’s squad isn’t so boring

First, the good news for the Utah Jazz:

They’re going to have a well-earned high seed in the playoffs.

The bad news: They may have to go through the defending champion Lakers, even possibly in the first round (which follows a play-in round for teams that finish 7-10). The Jazz lost in the first round of the playoffs in 2019 and 2020.

Beset with injuries to LeBron James and Anthony Davis, the Lakers find themselves in a three-way tie for fifth place in the Western Conference, but now their stars are back and, well, you can see where this is going. James re-injured his ankle Sunday night and his status is uncertain heading into the week, but it’s likely only a temporary setback. Heading into Monday night’s game against the Nuggets, the Lakers have won only three of their last 10 games, but you get the feeling they’re going to pull their act together in time for the playoffs.

Now, late in the season, it’s the Jazz who have injury issues to key players. Donovan Mitchell has been out for a couple of weeks with an injury, and Mike Conley has missed several games with an injury as well. All of which coincides with a mild slump.

The Jazz, who have been on a tear for four months, have faded, at least by their standards. After winning nine in a row during a stretch that began in March, which improved their record to a league-leading 38-11, they have won only eight of their last 15. The Suns have tied them for the best record in the league, and the Nuggets, who have won nine of their last 10, are only three games back.

Two of the Jazz’s losses were in overtime and another loss was decided by one point, but a loss is a loss and this is not a good time to slump. The Jazz have only eight games remaining in their regular season and then it’s time for the playoffs.

(On the bright side, the teams with the three best records in the Western Conference — Suns, Jazz and Nuggets — are not one of the super teams built by colluding players. Anything but another repeat of super teams in the NBA Finals is an improvement in a league that has zero parity and doesn’t care.)

Anyway, through bad luck or timing or whatever you want to call it, the Jazz, who have been front-runners in the league since the season began in December, could end up …read more