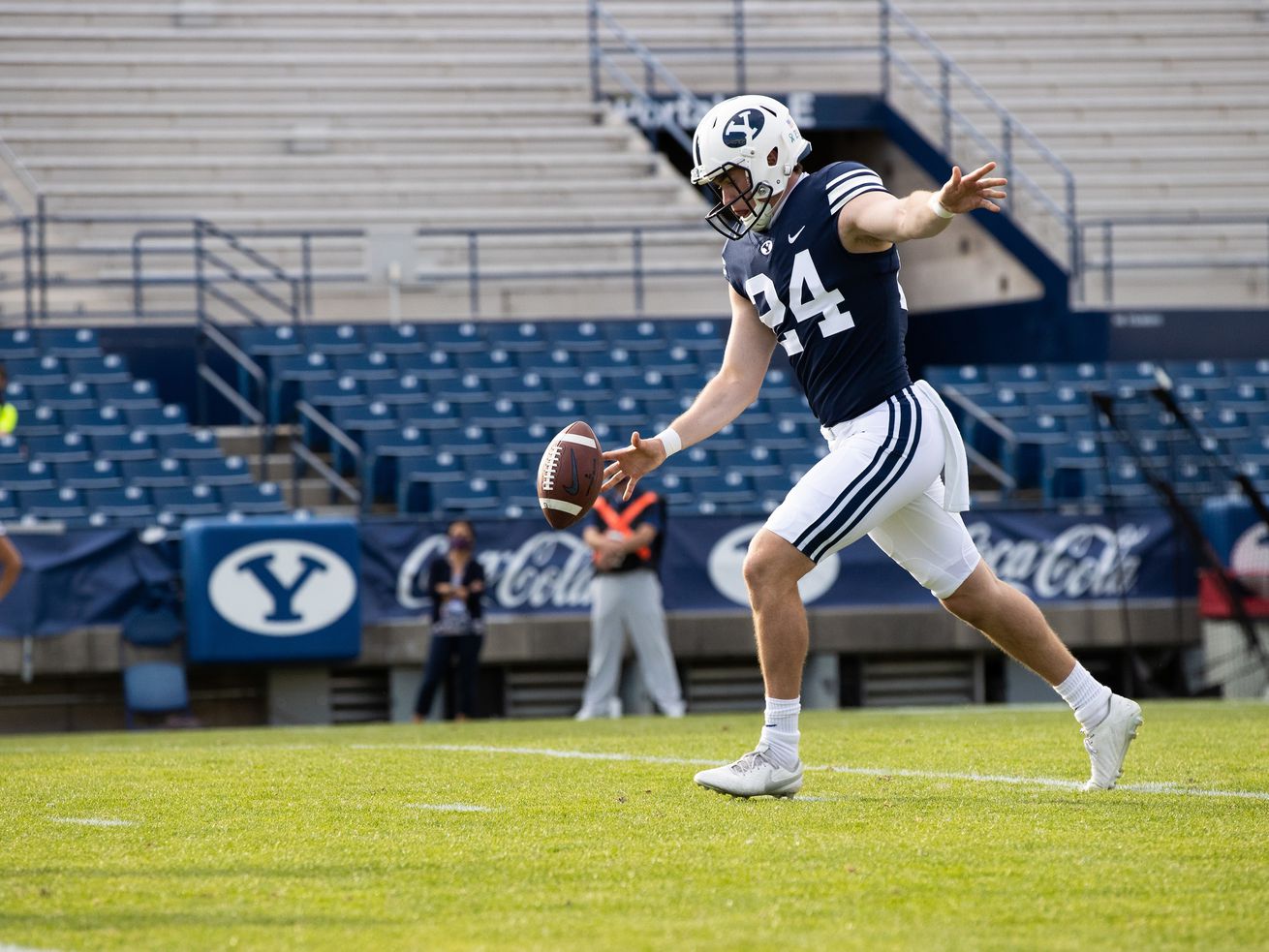 BYU punter Ryan Rehkow gets in a few punts prior to the Cougars’ game against UTSA on Saturday, Oct. 10, 2020, at LaVell Edwards Stadium. | Jaren Wilkey, BYU

Freshman Ryan Rehkow, 6-foot-5 and 240 pounds, is one of the biggest punters in college football, but he can also kick field goals, hold for PATs, and make crazy trick-shot videos

When it became apparent he was going to be BYU’s primary punter in 2020, recently returned missionary Ryan Rehkow took a look at the Cougars’ schedule and figured he would be punting eight or nine times in the first couple of games alone.

Obviously, the Spokane, Washington, native has had to adjust.

Through four games, Rehkow has been called on to punt just eight times for the No. 13/14 Cougars, and half of those came in Saturday’s 27-20 win over UTSA. BYU’s offense, first in the country in first downs per game (27.0) among teams that have played four games or more, has been so good that punts have rarely been needed.

Also, head coach Kalani Sitake hasn’t shied away from going for it on fourth down; the Cougars are 4 for 9 on fourth-down conversion attempts.

“Yeah, it has been a surprise to only punt a couple times so far. But I couldn’t be more happy for the team with the way it has worked out.” — BYU punter Ryan Rehkow on only getting eight punting opportunities through four games

“Yeah, it has been a surprise to only punt a couple times so far,” Rehkow said before the UTSA game. “But I couldn’t be more happy for the team with the way it has worked out.”

Rehkow (pronounced: REE-co) is averaging 45.8 yards per punt, which would rank him 11th in the country if he had enough punts to qualify. Special teams coach Ed Lamb named him BYU’s special teams player of the game for his performance against UTSA, especially because Rehkow got a punt off in the final minutes and drew a roughing-the-punter penalty that allowed the Cougars to keep the ball.

“He was the player of the game for the versatility that he brought and the way that he executed the final punt,” Lamb said. “He had to take a snap under pressure and ended up drawing a penalty there by leaving his leg up.”

Rehkow also serves as BYU’s kickoff guy and is the holder on PATs. Field goal kicker Jake Oldroyd was out with a bad back vs. UTSA, so Rehkow would have kicked field goals last Saturday, Lamb said, but the coaching staff didn’t call for one. Oldroyd is expected to play Friday vs. Houston.