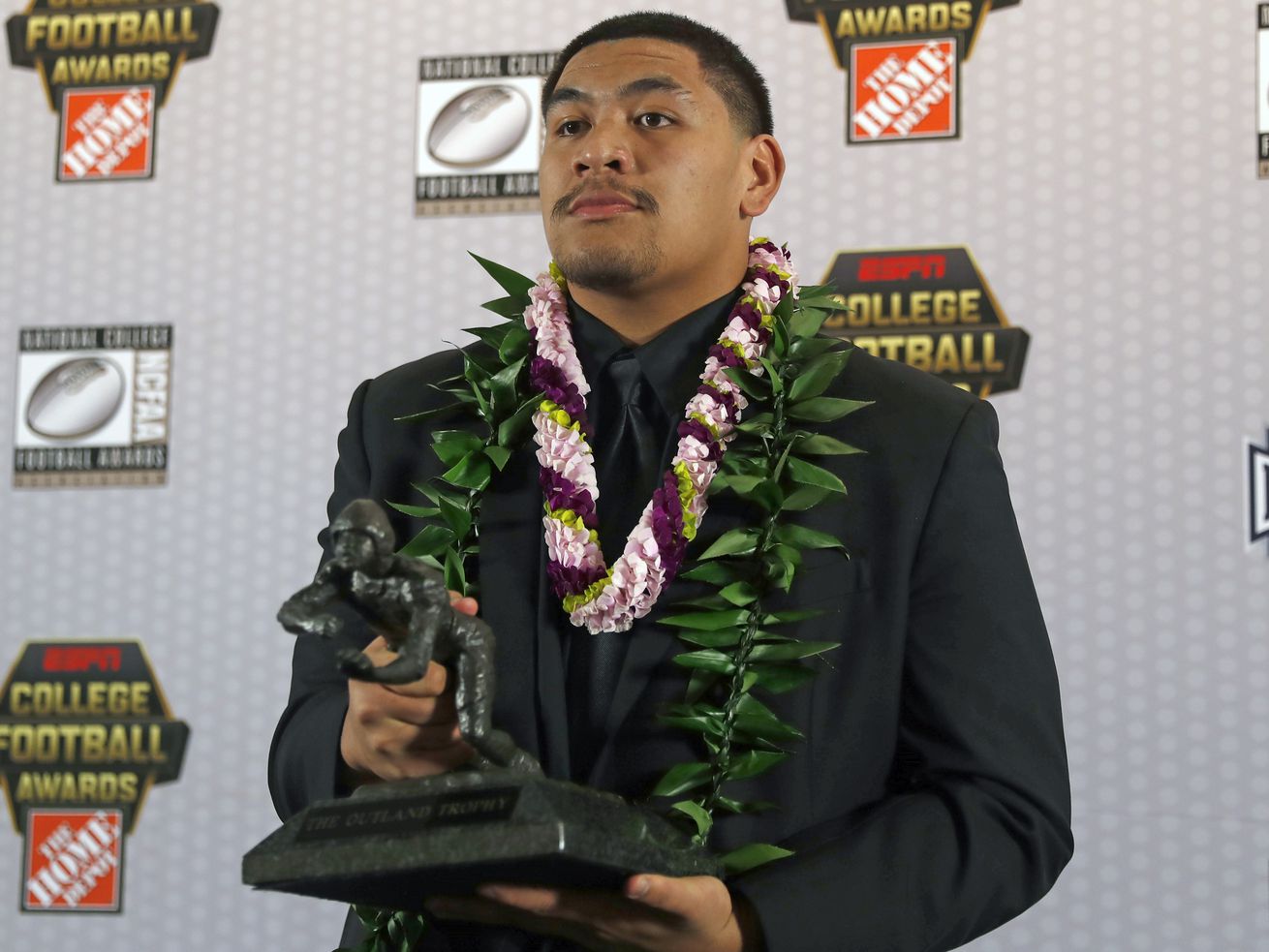 FILE – In this Dec. 12, 2019, file photo, Oregon’s Penei Sewell poses with Outland Trophy for being the nation’s best interior lineman, in Atlanta. Sewell, the Desert Hills High alum who was the No. 7 overall pick by the Detroit Lions in the 2021 NFL draft, is expected to start at right tackle this upcoming season for Detroit. | John Bazemore, Associated Press

The Detroit Lions have gone about constructing one of the better, younger offensive lines in the NFL. On Thursday, they added another piece the franchise expects to anchor the line for many years.

That piece is former Desert Hills High and Oregon offensive tackle Penei Sewell, who was taken No. 7 overall by the Lions in the 2021 NFL draft.

“He was one of those three that we were just through the roof about. To be able to land him, he’s going to be integral to our franchise for years to come,” Detroit general manager Brad Holmes said Thursday night, hours after the Sewell pick.

He is the third offensive tackle who played high school football in Utah to be drafted in the past five years, and the second first-round pick. He joins Garett Bolles (Westlake High, Snow College and Utah), a first-round pick by Denver in 2017 and the 20th overall selection, and Jackson Barton (Brighton High and Utah), a seventh-rounder to Indianapolis in 2019.

The 20-year-old Sewell appears to be walking into an ideal situation in Detroit. The Lions are fans, as well, of their youngest first-round draft pick of the common era (since 1967).

At 20 years & 202 days old at the time of selection, Sewell became the youngest player selected by Detroit in the 1st round of the common draft era (since 1967).

He’s the 4th American Samoan to be taken in Rd. 1. pic.twitter.com/26tbqLyWhT

“He’s just a transcendent talent. I can’t remember a guy with feet like him in a long time,” Holmes said. “It’s not just athletic ability; he’s got the toughness that we’re looking for. He comes from a football family, his dad’s a coach, and his brothers are college football players. We love the make up, and we couldn’t be more jacked about landing Penei.”

The 6-foot-5, 331-pounder is expected to fill the open starting spot at right tackle. While Sewell played left tackle at Oregon, NFL Network’s Ian Rapoport reported two weeks before the draft he was training at right tackle as well to be more versatile, in case he was needed on the other side of the line.

Here’s who Sewell is expected to join in the Lions’ starting lineup in the offensive trenches: