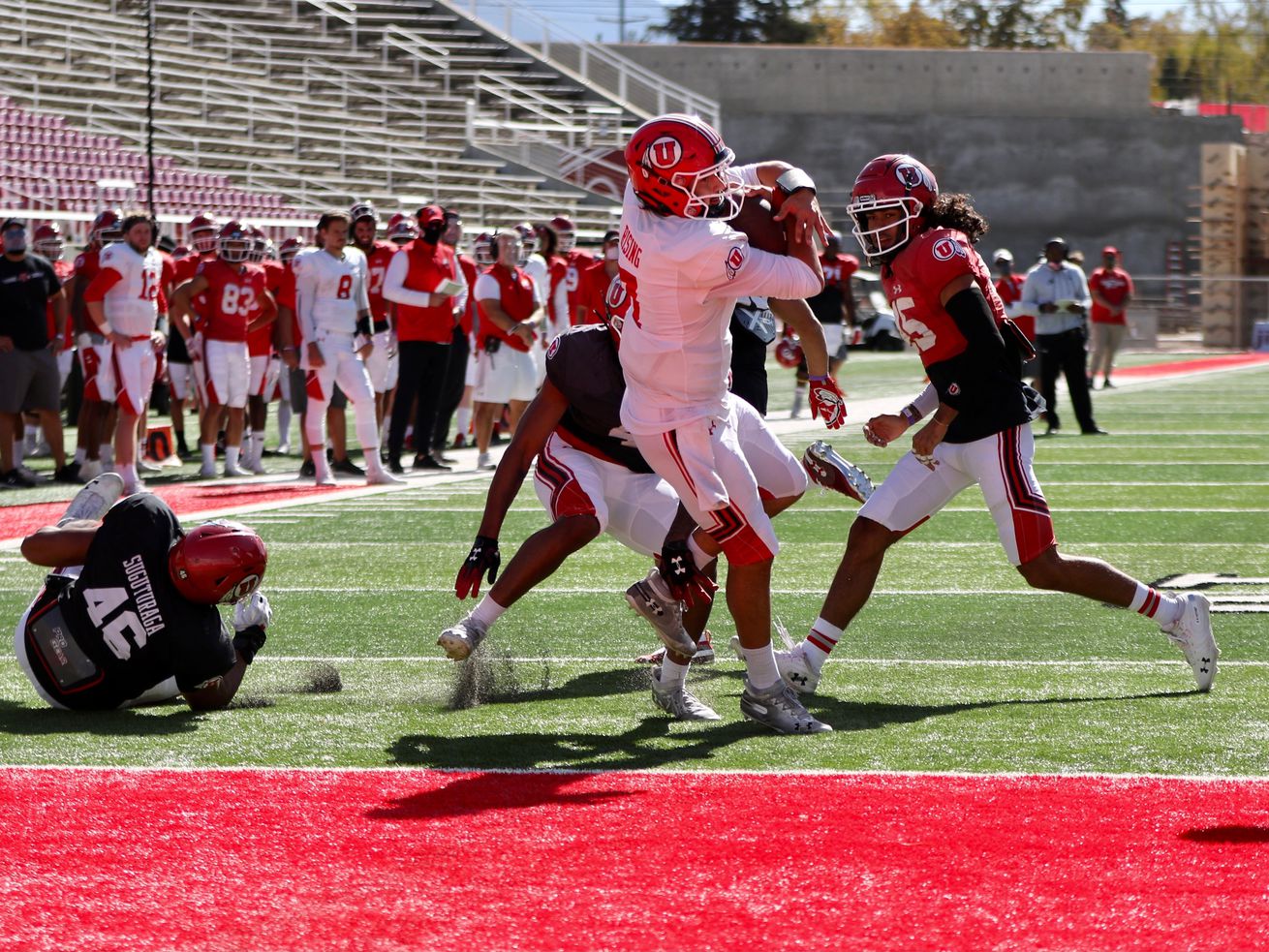 “Outstanding.” That’s how Utah coach Kyle Whittingham described the first camp scrimmage. The Utes, he said, got a lot of situational work in Saturday at Rice-Eccles Stadium.

All three quarterbacks — Jake Bentley, Drew Lisk and Cam Rising — played well, but Whittingham noted they would reserve judgement until the tape could be watched. He later said that the pool of candidates will be reduced to two as the Nov. 7 season opener against Arizona approaches. No public announcement will be made, but Whittingham acknowledged that the reduction is guaranteed to happen.

“The offense overall had a good day. They probably had the better day of the two units. (The) defense gave some things up. We’ve got to get better at open-field tackling, gave up some gaps in the run game.” — Utah coach Kyle Whittingham

“We don’t have a choice in that. We have to be able to start sinking the reps into two guys and then, like we’ve said many times before, get that down to one,” explained Whittingham, who added that there’s no time left to give equal reps to three quarterbacks.

As for the other skill positions, Whittingham said that Jordan Wilmore, Ty Jordan, Devin Brumfield and Micah Bernard stood out in the scrimmage. He also had praise for the wide receivers.

“The offense overall had a good day. They probably had the better day of the two units,” Whittingham said. “(The) defense gave some things up. We’ve got to get better at open-field tackling, gave up some gaps in the run game.”

Despite the shortcomings, Whittingham saw a lot of good things on both sides of the ball. He noted, however, that they have a lot of work to do. Next week’s practice schedule is a “carbon copy” of the last one and will also culminate with a scrimmage.

Although details weren’t shared — the practice was closed to the media because of the coronavirus pandemic — Whittingham acknowledged that some separation was taking place. He said they had a general idea of the running backs likely to be on the travel squad.

Scrimmage 1 is in the books!

The wide receiver corps is a bit depleted with Jaylen Dixon’s decision to transfer and an unspecified season-ending injury to senior Tyrone Young-Smith. While noting the position group is getting a bit thin, Whittingham had positive things to say about Solomon Enis, Bryan Thompson, Britain Covey, Money Parks, Devaughn Vele and Samson Nacua.

On defense, where the Utes must replace nine starters, the main focus is on the secondary. Whittingham said the cornerbacks were solid with sophomore JaTravis Broughton getting the best early evaluation. Malone Mataele, Clark Phillips III and Bronson Boyd were also singled out.

“That corner pool is starting to develop a hierarchy. We need six, that’s ideal if you …read more